No story is complete without the human element. Having arrived st Balladonia early we had more of an opportunity to talk to people than previous days.

We met our neighbours Con, the Earthmover, not the Fruiterer, and his wife Bridget. They were from Perth headed to Adelaide to visit their son and then up to Wollongong for an engagement party and maybe on to Brisbane with friends. ‘How long will you be away for?’ we asked. ‘Well we’ve got to be back by September’. Where are we going wrong?

Second person we talked to was Grace, a young American woman who had be working as a dive instructor in Thailand before coming to Australia. She was working at the Roadhouse in order to extend her visa to two years. Apparently if you are prepared to work in a remote location in the tourist or agricultural industries for 88 days you can extend from one to two years. The money at the Roadhouse is also good, accommodation is good and cheap and all you can do is work. At the end of her 88 days she planned to buy a car, drive to Exmouth and go back to dive instructing. Where are we going wrong?

Anyway back to the trip.

What a day! It started early again as the constant time changes are messing with our sleep. We were up at 5:30am, had breakfast and were on the road by 7:00am. It was cold and there was a very heavy foggy mist, to the extent the bike, it’s wind shield and our visors were soaked so we couldn’t see through them. We decided on traveling at a sedate 80kms an hour so we could see any Roos that might have missed the previous nights opportunity to become road kill, and who may have thoughts of taking us with them!

We travelled for almost an hour in the mist. Very ghostly with only the occasional truck looming out the grey towards us. The photo doesn’t do it justice as at times we could only see 100 meters ahead. 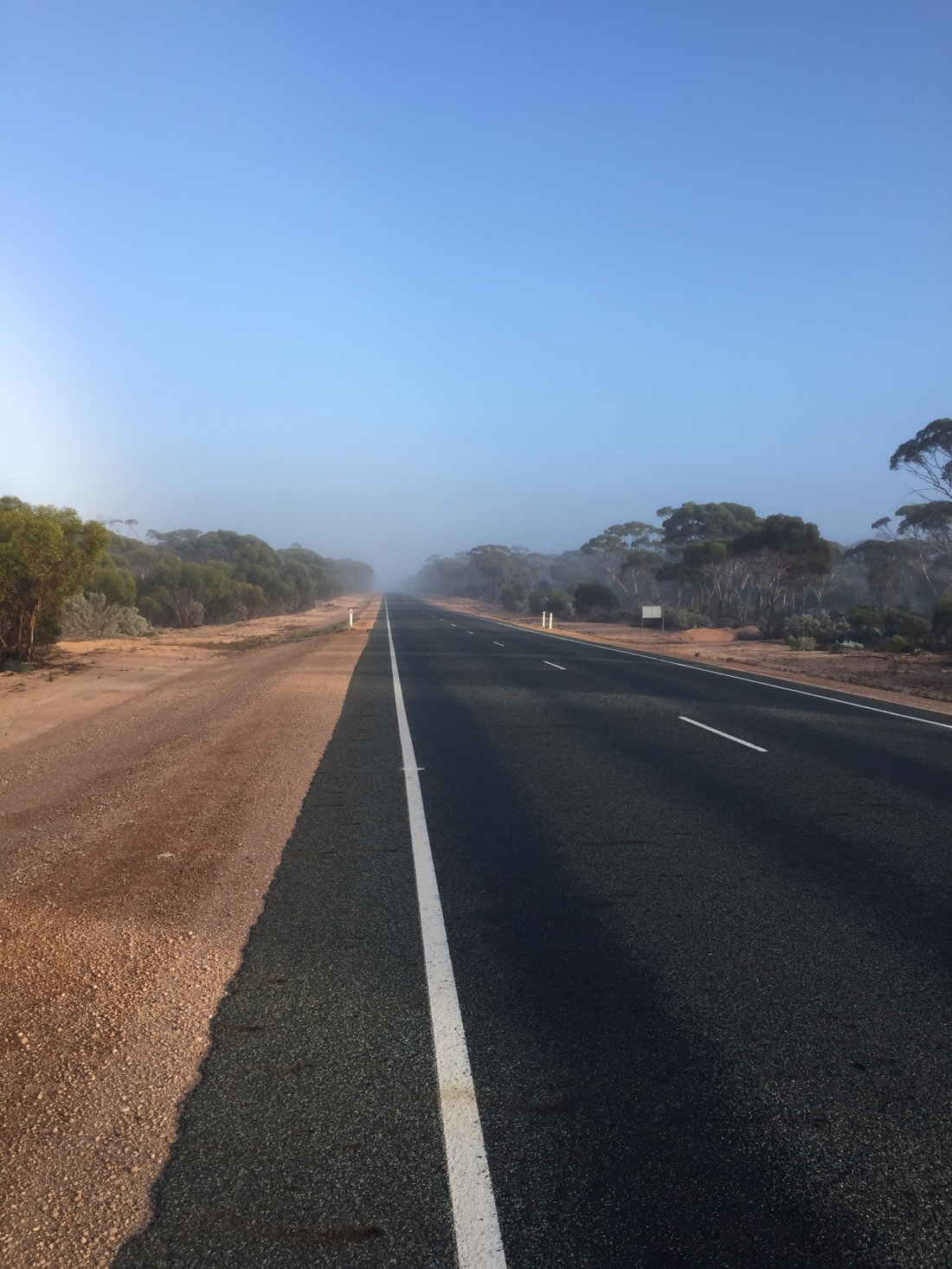 No gorillas to see here

We finally broke out of the mist and onto some higher country heading up to the Fraser Range. Once again long straight roads flanked by low woodland.

We did feel like we were ascending and finally got to the top of the Range which was a relative term but certainly different after days of traveling through very flat country.

Well it was topography

Getting closer to our first stop at Norseman the character of the forest changed with Salmon Gum becoming the predominant species. Spectacular trees with their shining leaves and coppery, metallic bark – individually impressive but as an avenue lining both sides of the road quite a sight.

Looks like you could make pipes out of it

Further along we went through the Dundas Nature Reserve and started to see the first of many pans. Some red and muddy others crusty, white with salt. 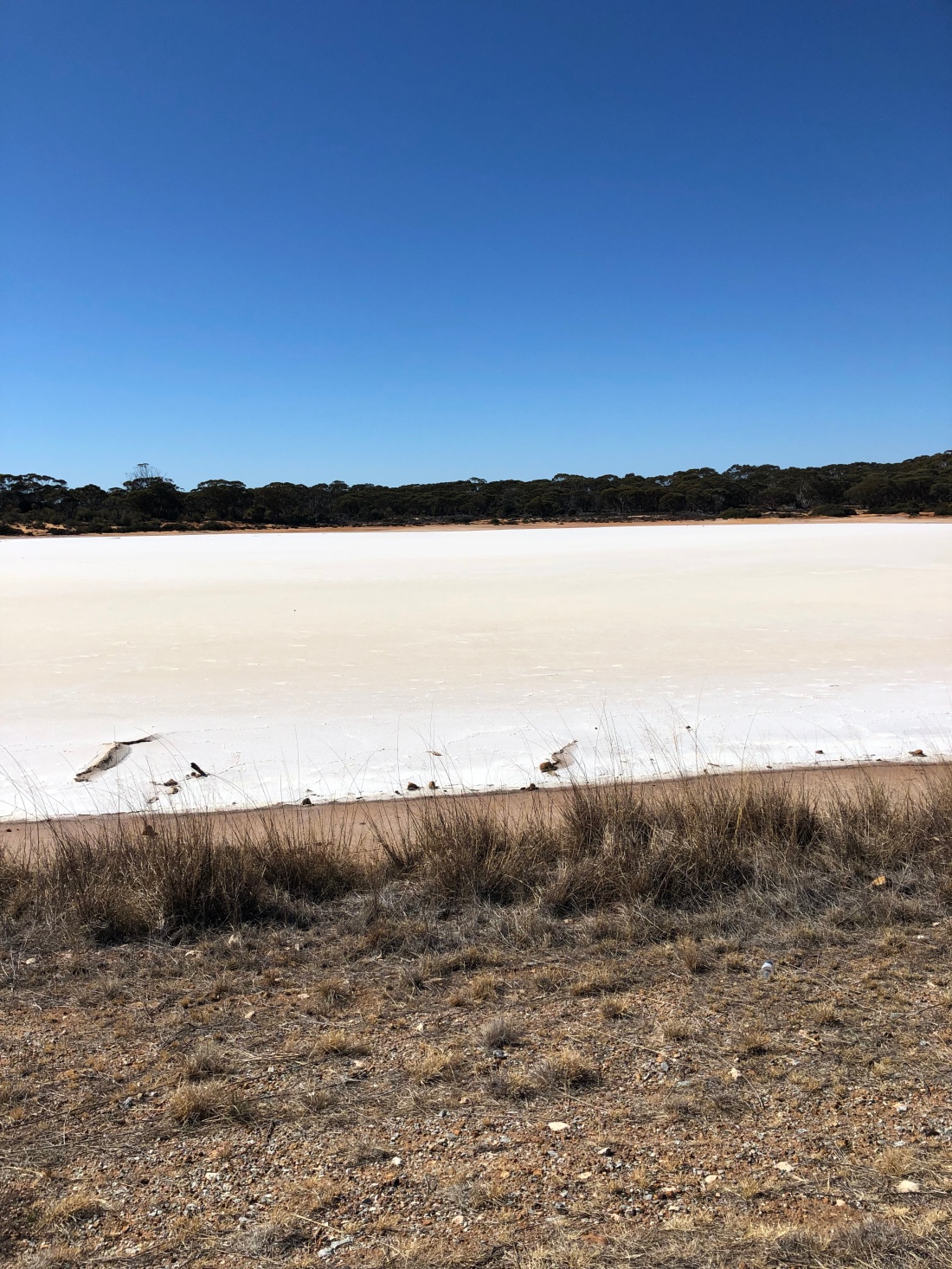 We then got to Norseman, filled the bike with petrol, had a cup of coffee, cruised the two streets, decided we didn’t like it, turned left, as turning right takes you to Kalgoorlie and got going again.

Once again Salmon Gums lining the road all the way to …. Salmon Gums. As we closed in on the town we began to see the first of many grain fields. Very large and actually felt a bit like being back on the Hay Plain.

Somewhere along this bit of road we left the Nullarbor Plain. While we knew we crossed the Plain it was a little disappointing that there wasn’t a sign denoting the south west edge.

As we entered the town we passed a Britz Toyota Ute parked on the side of the road with three young Asians waving more enthusiastically than we’d normally expect. We waved back and carried on. On the south side of the town we had pulled over for a final photo of the Gums when the Britz Toyota pulled up behind us. Delightful young threesome tumbled out of the Ute, noted from the bike’s plate that we were from NSW told us we were the famous couple from Sydney crossing the Nullarbor on a bike that they had heard about. Finally we’re getting it right!

They’d had a nasty incident with a Roo on the road between Eucla and Madura which had taken off their right side bumper. This was the exact stretch of road where we’d seen so many dead Roos. Anyway photo’s were taken and we headed off immediately regretting that we had’t asked them to send us a copy of the photo.

The last 100kms to Esperance passed without much more of note other than the sense of building development as we got closer. Houses, power-lines, plantation forests and more lush vegetation.

We arrived at our accommodation at 12:30pm checked in and walked up the street to find some lunch. At that very moment and on the Esplanade of a reasonable sized town what should come down the road but the Britz Ute! We waved it down but of course not being on the bike weren’t immediately recognized. Anyway a great reunion was had we formally met Eric and his girlfriend Claire from China and Hazuki-San from Nagasaki in Japan. All post graduate students at Sydney University. Amazing coincidence and fun to catch up again. Most importantly to be able to post a record of our first meeting.

A further twist in today’s post is about the bike. When we got to Ceduna it appeared the back tyre was wearing rather faster than I’d expected. We decided to keep an eye on it but by the time we left Eucla it was obvious we’d struggle to get to Perth legally or more importantly safely.

Houston, we have a problem

In my control freak way I had noted the contact details of every motorbike dealer on the route – just in case. So we’d phoned Esperance Power Plant Motorcycles while in Madura and arranged for them to ship a new tyre from Perth to fit on the Friday. Given we didn’t know when the tyre would arrive we decided to stay an extra night in Esperance and shuffle the rest of the planned accommodation along by one day.

Finally, as we’d arrived so early we had the opportunity of driving the Esperance Great Ocean Road. What an amazing drive. Stunning beach after beach. 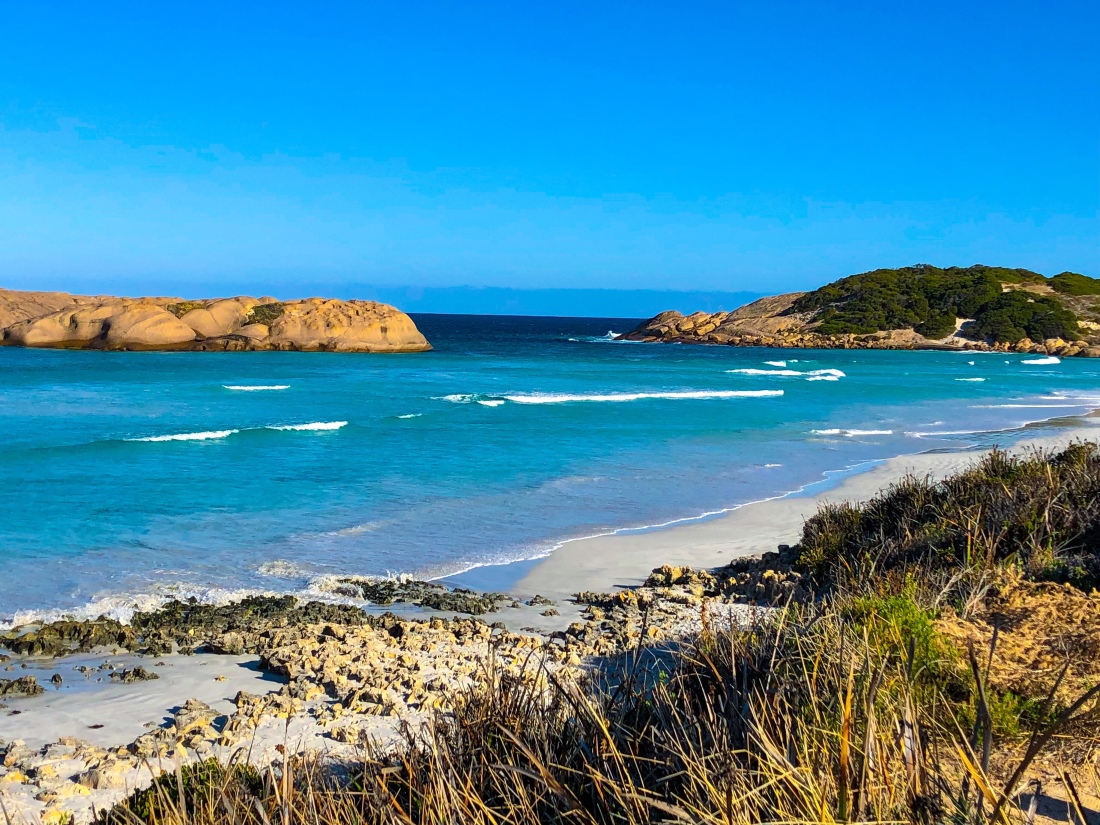 Has to be one of the most spectacular bits is coastline we’ve seen anywhere.

While not strictly part of the route this took the days mileage to a respectable 456km.

And that was the end of day 9.